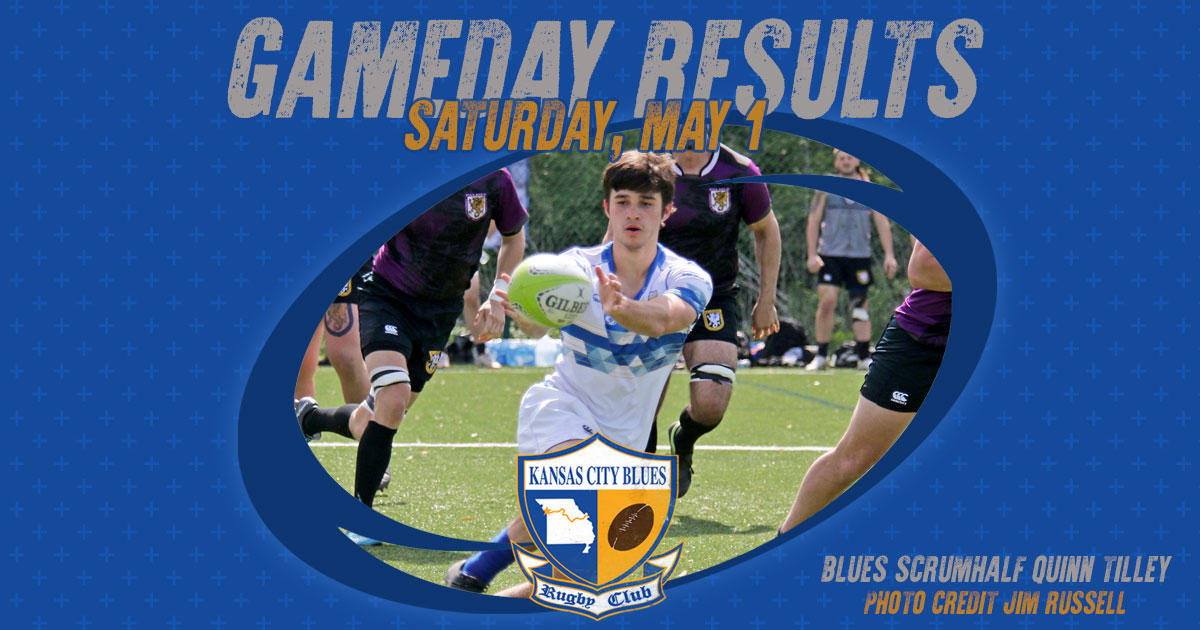 The Modern Blues, at least in the eyes of our narrator, have always had their best days in good weather. Much like a racecar, who still functions in the rain and sleet and snow but whose true self is only displayed in the sunshine of a nice day or under the lights of a clear night sky, the Blues true form comes out when the day is clear and crisp. On a day when the wind may blow, but not enough to rough the air. Especially… on a day when the Blues play on their turf. Their sweet, hot, perfectly even turf. On a day when the sun heats up the turf just enough that the faint smell of hot rubber balls can be picked up underneath the people, beer and cigar smoke that fill the cage. That is a day when the tread on the tires that is Blues Rugby grips the track sticky enough you can almost hear it. The heat of the exhaust rolls out in translucent clouds over the blacktop. The V12 motor roars as the Blues shift gears, phase to phase. The corners are taken at a speed that seems almost a touch too fast but isn’t. Stalled cars and spinouts are weaved in and out of at the last second. The Hi-Test gas tanks of the Blues burns fuel but the gas tanks of the opponents burn faster. The game is too fast on the turf. This is where the Blues thrive. Low in, High Out. The Blues take the corners at pace. On a day like Saturday, the Blues win the race.

The race on Saturday started out slow for our Blues. A number of defensive penalties marched the Purple Palmer Dragons down the field on their opening possession. You could hear the Blues' Starter clicking. A knock on penalty. Cough from the engine. A defensive offsides. The sound of the Blues motor turning over but stalling. A high tackle. Spurt, spurt, chunk, chunk, chunk. The Blues were still working on getting their car started as Palmer made their way to the 15 meter line. Greg Fry tried to choke the engine with a hard shoulder tackle at the 10 but an offsides whistle came again. As the Blues Banged on their dashboard, Palmer tapped and went from the 5 with the 9 dotting down an opening try just outside of the post. A conversion kick through made it 0-7. Blue pressure into the face of the Palmer defense on the next possession caused a knock on. And with the next scrum, abouts the Palmer 30, the Blues engine roared to life. The 8-9 pick burst off the back of the scrum, 8 Jimmy Lillis popped to Young Superstar #9 Quinn Tilley as the 6 put his shoulder into him. Quinn hit second gear as he broke the gain line and 3rd as he knifed between the Palmer centers and behind their defensive line. A perfectly timed pass to #15 Casey Cummings on the edge came out as the Palmer 15 laid his hit on Quinn a moment too late. Casey put his head down and ran through a tackle of the long haired Palmer 8 who had streaked across the field behind the play. He was then met by the 7 at the goaline and sandwiched between him and the 15 who had gotten off the ground and ran the play down, lunging at the younger of the Cummings brothers high and from behind. A trio of bodies flew into the corner of the Try zone. The sir blew his whistle and awarded a penalty try. Dangerous tackle on the part of 15. Yellow Card. 7-7. 12 min in. And now we were racing.

A phased drive down the field. A Palmer penalty and a veteran booming kick to touch by 12 Blake Baty. A won lineout and a structured ball across the field. The Blues were shifting smoothly now. A Palmer penalty at their own 22. A Quick tap by Quinn. first gear. Passed out to 10 Ty Lewis. second gear. phased out to Baty, through his hands to Afa. third gear. Who cleverly pops as he puts a shoulder into a Palmer Back. fourth gear. Jimmy Lillis catches as he sits down his defender and keeps him there with another pass to first time D1 starter Alan Bortolloti. Fifth gear. Alan breaks a tackle from the inside with a stiff arm and pops at the 5 as he is being taken down from behind to none other than Blues Tik Tok Star Stephen Lomas. Overdrive. At that point the chances of the thunderous legs of Lomas being wrapped were slim to freaking none. He plunges into the try zone less than 5 minutes after the Blues first try. Sam Tanner makes the conversion from the sideline, 12-7.

Blues kick for clearance after receiving the kickoff and then bring the wood with multiple big tackles behind the Palmer gain line. The car is humming. The pressure creates a bad ball from 9 which is pounced on by a revved up 6 Alan Bortolloti. Two phases later and Q sends a ball to the 12 Baty from the Palmer 40. Baty sits a defender and then gives to Papa Kev Schwartze at the point of his middle forward pod, who tips balls it out to a tips line running Jimmy Lillis who splits and sits down a pair of Palmer defenders before high stepping the backside Palmer winger and diving into the Try Zone for the Blues third score in 10 minutes. Kick No good, 17-7. Palmer starts pressing as the Blues glide smoothly in and out of the turns. Ty Lewis intercepts a ball on the next Palmer possession at about the Blues 35. He pops to Greg Fry who runs a patented hard Fry line, taking three defenders to bring him down. Q-9 hits a bingo ball to the weak side and Casey cummings uses up two defenders and puts a ball out to #7 Danny Apgar on the edge into space. Apgar breaks the gainline and puts his boot to a chip kick as the winger closes the distance. With their 15 in the last minutes of his sin bin time and not playing safety, the kick sails into the corner and takes a right turn on the bounce, pinning Palmer at their own 5 yard line. Palmer struggles to clear the ball from deep in their own territory and a few start and stops end with a Blues Scrum on the 25. A ball out the back of the scrum and to the backs ends in the hands of 14 Aren Martin, who does Aren Martin things on the edge, and outclasses 3 defenders on his way into the try zone. Kick good, 24-7.

Palmer has a small jump start of their own in the next phase of play. Intercepting the ball coming out from 9 from behind a Blues lineout, their 8 took it to the 10 and then popped to a trailing 2. Kick No Good. 24-12. The Blues spinout was short lived however. On the next Palmer possession following the kickoff the Blues stole a lineout, phased one up the middle for good yardage just past the 50, and then simply sent the ball out again to a red hot Aren (Aston) Martin, who revved his engine again around the outside and 40 yards downfield for a try. Kick no good, 29-12. The Blues motor purred as the first half came to a close. Palmer coughed a ball out the back of a scrum on their own 40, Quinn pounced on it and streaked down field and to the outside, beating a couple of centers and then popping back inside as he closed to the outside winger. Trailing 7 Danny Apgar received the pass on the fly and stiff armed the last Palmer would be tackler on the way into paydirt. 34-12. The hot race track of the green and black dirt buzzed with heat and cheers. The halftime whistle blew.

The second half was more of the same. The Blues speeding while Palmer went the speed limit. D1 youngings took center stage in the second half. Alan made hard tackle after hard tackle. Matt Lewis ran on the edge. _Prop Josh Jiminez ran hard lines. A strip tackle and breakaway by Greg Fry passed through multiple hands including Lock Gabe Caldas and Quinn Tilley before being punched into the try zone by Rookie Sam Tanner. 39-12. Greg Fry continued his stellar day with a try manufactured seemingly wholly by him and the 9. A hard gain line breaking line by Greg was popped back inside to Quinn, who took it another 15 yards and then popped back off the ground after going down to a trailing Greg, who took it the last 15 yards, through a defender into the try zone. Kick good. The checkered flag waved, Final score 46-12. What a day at the track. Your Blues looked and felt like themselves as they wrapped up the Spring season in front of a healthy fan base. The Club is grateful that this season got to happen and we got to share a number of Rugby Saturdays with our friends, families and supporters. Look for information about our coming 7s and Fall Seasons soon.

D2 battled a hard fought and tough opponent in the Wichita Barbarians in Wichita. The old wicked witch of the West with the Gloves Steve Wright did some old man black magic stuff on our young boys. The Wichita team always shows up at home and put an old man on young son type offensive together against our youthful D2 team. Final score 7-32. The Boys had a great year, took some lumps and most importantly got better. We look forward to the D2 boys competing for spots throughout this summer and into the fall. 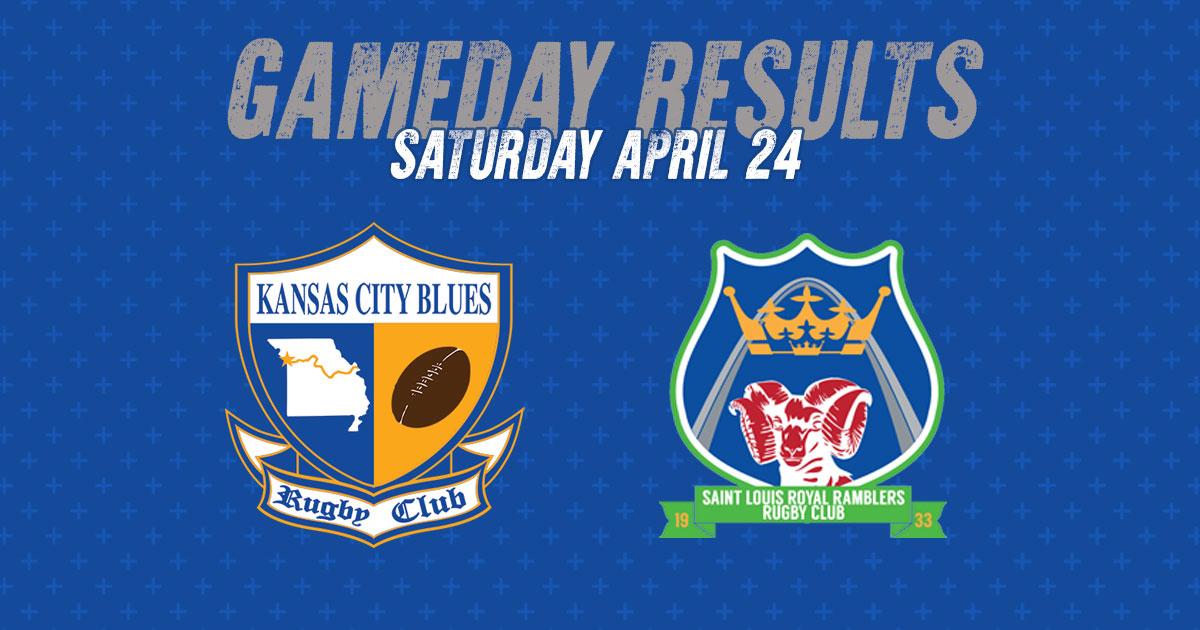